Hybrid Learning: Is it the world’s new normal? 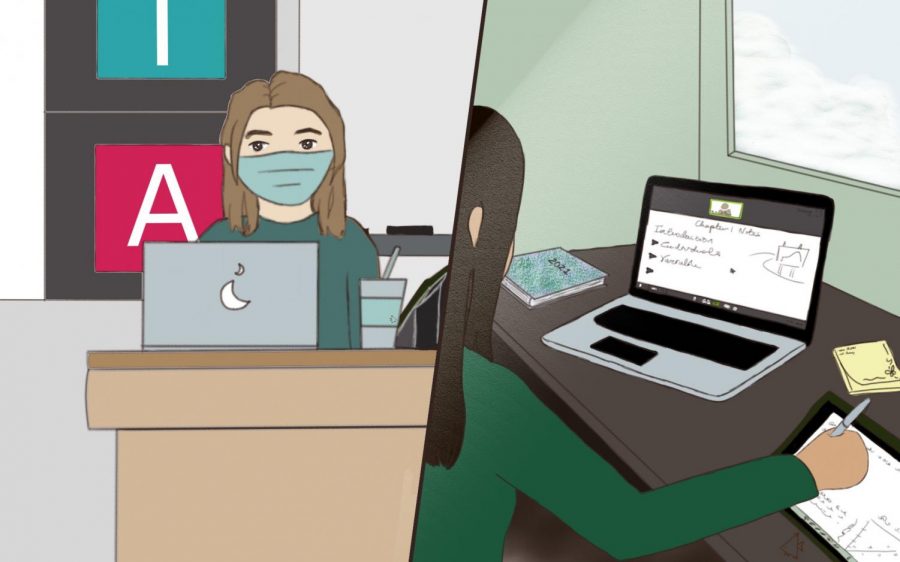 High schools across the globe have been attempting to change their curriculum and the way that they teach school in order to adjust to the pandemic. This has been no small task, especially since most schools were entirely unprepared and had never had to teach this way before. Our own school, Fremd High School, attempted to adjust to these changes as well. The 2020-2021 school year started incredibly differently than years past: entirely on Zoom. A new video conference app became our new norm as the pandemic raged on. However, around October of 2020, the pandemic slowed down a bit. Cases were still high, but they had gradually stopped increasing. Because of this, Fremd decided to open their doors. Instead of making their students stay at home, they were allowed the choice of coming back to school, part time. This plan gave way to a beneficial growth among the students and teachers alike, allowing a positive sense of normalcy once again.

Hallways and classrooms soon became filled with the restless chatter of students making their way to and from class. Passing periods were changed to fifteen minutes instead of the usual five, allowing for teachers to spread out the amount of kids in the hallways. As successful as this plan was, many students and teachers alike became disheartened with the small number of students that were coming to in person class.

Fremd implemented a system so that only half of the students interested in coming to school each week were allowed back into the building. This made many classes near empty. For example, my own computer science class was barely filled every day, with me as the only student attending in person. So, near the beginning of second semester, Fremd decided to open their doors to anyone who wanted to attend school in person, any day they wanted. This plan allowed many more students to begin coming to school, a benefit for everyone attending.

As a student who strives when in social situations and when around the overall physical nature of a high school classroom, this was exciting news. I was finally allowed to leave my house and venture to a location that I hadn’t been to in months. Gone were the days when the only glimpse of my classmates that I saw were their ceiling fans or the top of their foreheads. I was finally able to interact with my classmates once more, and I could not have been more pleased.

Students were welcomed back into their high school and allowed to see their friends once again for the first time in months. For some students, this was the first time that they had been back to school and seen their classmates since school shut down in March of 2020. Students who attended school in person were finally able to meet their teachers for the first time. Additionally, being in person for class allowed easier communication between student and teacher, which was very beneficial when it came to asking for help.

The opening of Fremd also gave students the benefit of socializing with people their age. They finally got to leave their homes, where they were only among parents and family members, and able to communicate and bond with their fellow classmates. This helped make students feel better overall because they were finally leaving their houses and getting back to the real world.

It was also easier for many students to focus on their tests and classes better when they were in the building for learning. Being at home, among noisy family members and raucous pets, can make learning hard. The background noise takes their attention away from the teacher, which made many students begin to see a drop in their grades. The experience that in person learning provided grounded many, helping them see growth for the first time a while.

When in person for learning, students are also forced to pay attention. It can be so easy to turn one’s camera off and become distracted by TikTok or some kind of video game. Being in person removes this distraction and forces the students to give their entire attention to the teacher, without little things like barking dogs, noisy little siblings, or funny videos sent in group chats making them not pay attention.

Obviously, in person learning is not for everyone. There are still risks for those with health problems when coming into a school filled with people, and many fear risking their health. This is a valid concern, so no one should be made to come to school without their consent. However, if you were to ask a student in Fremd’s bustling hallway, you would find that many of them are content to be back at school. It allows them to feel “normal” for the first time in months, an experience that many hadn’t had for a while.

Although this type of learning isn’t ideal, it is something new and allows us to see progress.  Our lives have changed entirely in the past eleven months, an experience that none of us thought we would ever live to see. I truly look forward to the day when I can once again be stuck with the challenge of maneuvering through the bustling hallways and walk to and from all eight of my classes with my friends, but for now, I am happy with the middle ground option that I have been presented with. Even if it does force us students to wear masks and walk on only the right side of the hallways all day.