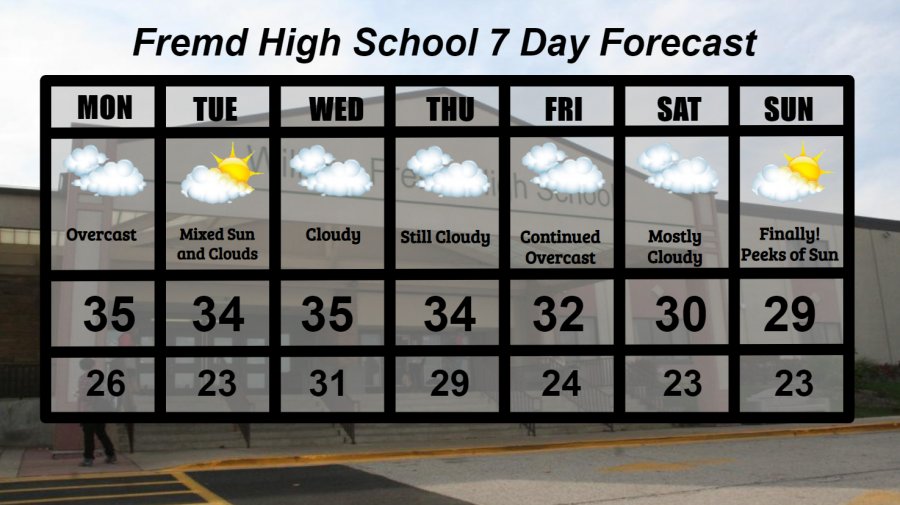 A very cloudy yet mild week by January standards is on tap for this week as a weak storm system pivots around the area to our south, keeping precipitation chances at a minimum and clouds at a maximum. The only two chances for sunshine will come on Tuesday 1/5 before the storm system enters the Midwest, and Sunday 11/10 as that storm system finally exits. All other days of the week are expected to be overcast. As a result of all this cloud cover, temperatures will not vary day to day, staying primarily in the lower 30s and upper 20s. The little variance in temperatures comes from the ability of clouds to trap heat in at the surface layer of earth. Clouds during the daytime inhibit warming of temperatures, while clouds at night inhibit the ability of the heat to escape into higher portions of the atmosphere. The week ahead will feature little to no precipitation, with the only slight chance of precipitation on Monday 1/4 during the evening hours.

Monday 1/4: Cloudy skies likely throughout the day with a slight chance of some light snow or rain towards evening. High temperature of 35° with a low temperature of 26°.

Friday 1/8: The overcast skies continue as the storm system responsible for them pivots around our area to the south. High temperature of 32° with a low temperature of 24°.

Saturday 1/9: Clouds likely for most of the day, finally beginning to clear out late at night. High temperature of 30° with a low temperature of 23°.

One lone storm system will likely be responsible for most of the weather across the eastern half of the United States this week as it moves slowly across the region. Areas south of the low pressure track can expect to see rain and thunderstorms, mainly confined to the southeast United States. Some rain and snow will be possible across portions of the western Midwest, though it likely won’t add up to much. The rest of the northern United States is expected to remain rather dry and seasonable, with cloudy skies and temperatures perhaps above average in some areas. There are no significant weather concerns for the upcoming week across the contiguous United States.