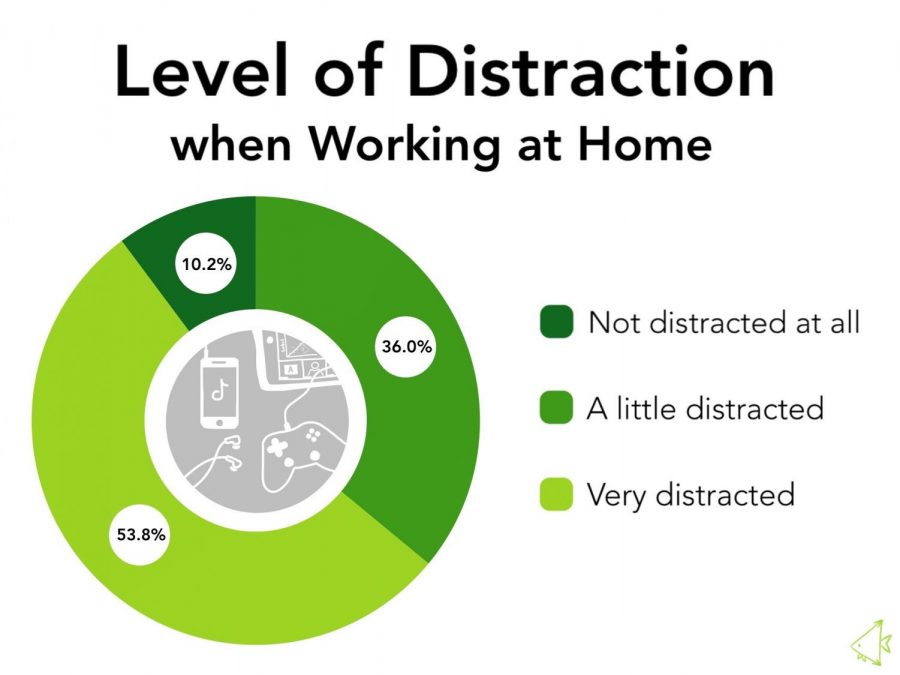 In the midst of quarantine, doing schoolwork at home instead of in the traditional classroom has become the new norm. Therefore, it is unsurprising that students may feel an impact of their environment on their levels of productivity and distraction. In a recent survey, Fremd students expressed thoughts about their own productivity levels and distractedness while working at home.

Compared to before remote learning, how productive are Fremd students while working on tasks at home? The majority of participants across all four high school grade levels believed their productivity levels have been relatively the same.

On the two ends of the spectrum, only 7.6% of participants believed that being at home caused them to be the most productive they’ve ever been, and 10.2% have found themselves being the least productive while in their home environments.

The level of distraction as surveyed exhibited a greater percentage difference between the grades, though over 50% of respondents collectively believed themselves to be very distracted.

High levels of distraction were mirrored in the junior and senior grade levels with 52.7% and 65.5%, respectively, stating that being at home was very distracting. On the other hand, less than 50% of freshmen and sophomores found themselves being very distracted.

The significant amount of respondents citing being at home as the source for their increased distractedness is understandable, considering the easy access to nonschool-related gadgets lying around their rooms. Nonetheless, acknowledging and combating the greater degrees of distraction can help increase productivity as Fremd students continue working hard and staying safe within the confines of their own homes.