A closer look into the vaping epidemic 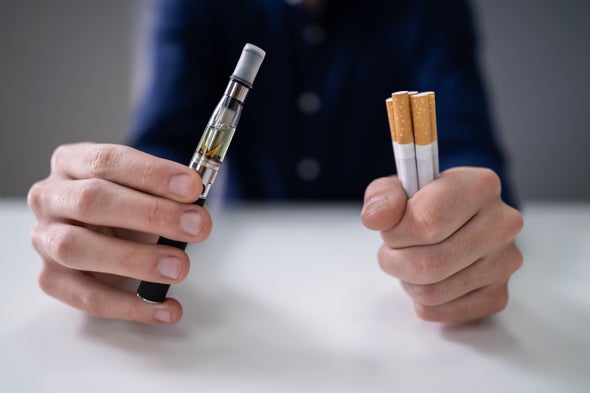 Vaping, originally intended for adult smokers looking to wean themselves off of regular cigarettes, has created problems with addiction and teen use. Unfortunately, the advertisements, design, and flavors of vaping along with involvement in youth initiatives has attracted an audience of young people, provoking possibly dangerous effects.

A study published by the New England Journal of Medicine found that 1 in 4 high school seniors and 1 in 11 eighth-graders had used e-cigarettes within a 30-day period. Because of the extremely high teen involvement in vaping, officials are now labeling the issue as an “epidemic.”

Recent headlines cover the harmful effects that are being seen in many communities, including the Fremd student body.

The technology of a vape uses a cartridge and liquid. This small device heats the liquid which then vaporizes and sends a stream of chemicals to the user.

Although this new technology does not contain tar and carbon dioxide like traditional cigarettes, they contain many addictive ingredients such as nicotine, THC, and CBD oil. According to experts, the nicotine content in one Juul cartridge, a prevalent brand of e-cigarettes, is approximately equal to the amount of nicotine in an entire pack of 20 cigarettes.

Unfortunately, the tendency of addiction to vaping is much higher among adolescents.

Although it is illegal for teen use of the product, many prominent brands have been accused of marketing directly to children. Youth-oriented flavors of vaping liquid such as cotton candy and whipped cream are sold in packages similar to candy. Some scholarships are also awarded from e-cigarette companies for writing essays describing the benefits of product use. Often times these scholarships do not contain an age requirement, allowing minors to participate although the minimum legal age for purchasing is 18.

Across America, selling vapes or e-cigarettes to anyone under the age of 21 is illegal. There is no statewide ban on vaping in Illinois, but there is a ban on vaping on any state-supported educational institution. This includes high schools such as Fremd.

Administrator Hamid Mehreioskouei, along with the rest of the disciplinary office, believes in individual repercussions rather than general guidelines. The administrators understand that the best way to help each student is different.

“Not every kid is the same, so not every resolution impacts each kid the same way,” Mehreioskouei said.

According to Principal Kurt Tenopir, the school is doing its best to keep up with the increasing use of e-cigarettes.

“The school has increased the number of times [student supervisors] patrol the restrooms during class periods, and sent patrols out into the parking lot before school,” Tenopir said.

“We take an educational concerned approach and try to see what’s going on,” Minniti said. “There’s usually underlying reasons whenever someone is engaging in substances that aren’t good for you.”

Contrary to major brands’ focus on advantages of vaping, the increase in use may have caused a severe lung illness outbreak. According to the CDC, there have been over 149 cases of severe lung illness related to vaping as reported by over 15 states from Jun. 28, 2019 to Aug. 20, 2019. Evidence shows no sign of an infectious disease as the catalyst of this outbreak, but shows involvement of e-cigarettes in all cases.

Since this outbreak, the number of similar cases has grown to nearly 200 and reported by 20 states, along with two instances of fatalities.

Besides the danger of lung illness, many heart issues can follow use of e-cigarettes. According to jamanenetwork.com, heart diseases such as atherosclerosis, arrhythmia, atrial fibrillation, and cardiac arrest can result from vaping, all of which could be fatal.

An interesting trend that differs from the trends ten years ago is how vaping affects students. Tenopir recalls back to when cigarettes were generally found among a certain clique. Now, Tenopir thinks it’s much different.

“Today, I think students who vape, it cuts across all of the different classifications of students, across socioeconomic lines, across racial and ethnic demographics,” Tenopir said.

Although much of the information related to vaping at Fremd is confidential, Tenopir did say that the amount of students vaping has increased over the past three years.

One of the major dangers of e-cigarette use is the lack of information on the long term effects. The technology is so new that researchers haven’t found all of the damage caused by using them over a longer time span. A few years ago when vaping was newly introduced, it was regarded as a beneficial technology to help cigarette addicts. Recent news of collapsing lungs and dead teens however, shows the opposite.