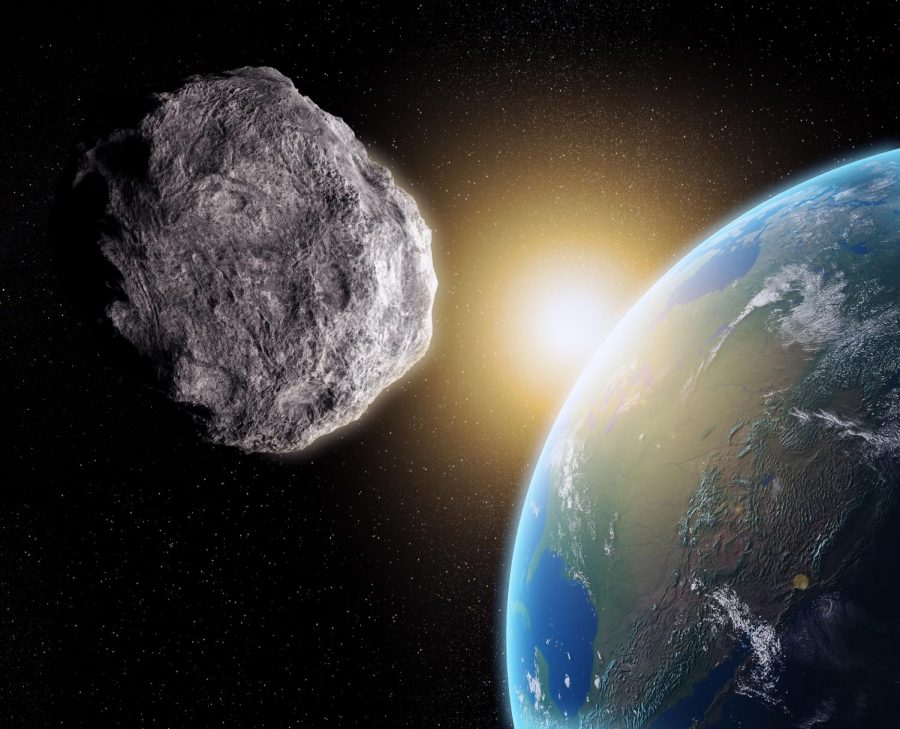 What will you be doing when an asteroid passes less than 3.5 million miles from Earth’s atmosphere? Perhaps you will be eating dinner, watching TV, or sleeping, but if you happen to be outside, grab a telescope, and you might be able to catch a faint glimpse of an asteroid speeding across the evening sky.

Asteroid 2000 QW7, will pass within 3,312,944 miles of Earth on Sept. 14, which is about two-hundredths of the distance between the Earth and the sun. Traveling at 14,361 miles per hour, or about 25 times faster than average airplane, the asteroid is estimated by NASA to be between 951 and 2,132 feet, falling into the NASA issued category as a  potentially hazardous object. Because of its size parallel to that of the tallest building on Earth, the Burj Khalifa, it has also been deemed a “city-killer” asteroid.

NASA’s Center for Near Earth Object Studies is keeping an eye on the asteroid, but experts believe the asteroid is non-hazardous, and will skim by Earth without disturbance.

While this asteroid is not presently threatening our safety, Elon Musk, CEO of Tesla and SpaceX, tweeted an alarming statement regarding possible future collisions between an asteroid and Earth.

“Wouldn’t worry about this particular one, but a big rock will hit Earth eventually & we currently have no defense,” Musk said.

“I feel like even if that [a collision] would happen there’s nothing we could really do about it so I don’t know if there’s any way to prevent it,” Desai said. I think it might just be inevitable.”

The “big rock” that Musk may be referring to is one named Apophis, the Egyptian god of Death, and is also nicknamed the “God of Chaos.” It is set to whiz by Earth on April 13, 2029. Apophis is relatively the same size as Asteroid 2000 QW7, but is predicted to come about 150 times closer. That is about 19,000 miles, closer to Earth than an airplane at cruising altitude.

However, NASA is positive that this asteroid will not come in contact with Earth. As for Musk’s statement, NASA is in disagreement. Their official website explicitly states that there is no known asteroid that poses a threat in the next 100 years.

Science teacher Kellie Flores trusts in NASA’s ability to deflect an asteroid if one were to come close.

“I’m extremely confident that people at NASA can [deflect an asteroid],” Flores said. “They’ve been to school, they know what they’re talking about, and I have full confidence in them,”

In contrast, freshman Shruti Patankar is slightly worried about a future impact.

“I’m not yet confident in NASA’s ability to deflect an asteroid, but I do believe that they must be working on something,” Patankar said.

Regarding our planet’s defense systems, NASA recently held their 2019 Planetary Defense Conference three months ago. At this gathering, a hypothetical asteroid impact scenario was simulated. In essence, NASA has firm faith in their ability to deflect an incoming asteroid if such an event would occur.

Flores is not at all concerned about a collision in the future.

“There’s always been cases where something large has hit the Earth, and it either hits it in the ocean or hits it in land, and it causes a big issue, but the last one to hit the Earth, I believe, created a large extinction period,” Flores said. “It’s been a while so I don’t know, maybe we are due for one, but at this point I wouldn’t be worried.”